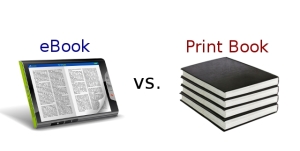 An eBook is an electronic book that you are able to read digitally on your computer, laptop screen or on devices (Atlanticbridge.net, nd). Most of the young adults now are more relying on e-books than the print-books. This is because that the e-books are more convenience as compared to the print-books such as the e-books readers just need to surf the net and search for the books that they want whereas the print-books readers have to take several kind of transportation and go to the bookstore to search for the books that they want.

A recent study, it showed that one out of five French people has already read an e-book, but also that more than half of them declared they would never touch one. It was as though e-books were not even within their scope. It was disconcerting. However, a few months later, it took no convincing at all to get other French publishers on board for direct-to-digital English translations. In 2012, e-books only represented 0.6 percent of total book sales in France. That number is expected to reach 3 percent in 2015. Their publishers in France are now fully aware of the importance of having a digital offer that is as attractive and as broad as possible.

According to JISC (2008, pg 43) stated that an e-book will encourage new readers by producing the e-books in an attractive format. This is because the editors are able to create finished documents with most of the design features that are available on the computer software by publishing the e-books on the internet. Reep (2006) also stated that desktop publishing has expanded the writer’s role in producing technical documents. Besides that, they are able to reach a wider audience compared to publishing it in a print-book.

In conclusion, there are no doubts that the e-books are slowly coming up in the market. We can now “imagine that a child will just have one e-book to carry around to school where they do not have to carry around their heavy text books and there will be not have any backpacks or bookbags to be left on the bus or lost somewhere between the school and home” (Atlanticbridge.net, nd). However, from my opinion, I think that the e-books will not replace the print-books, at least not now. An article from Atlanticbridge.net (nd) stated that being a writer and avid reader for years, he finds that it is the feel and smell of a book that makes it interesting as the whole experience of reading.